Arch Alfred Moore Jr. served three terms as Governor of West Virginia (1969-1977, 1985-1989). He was an unsuccessful candidate for reelection for governor in 1988. Previously, he was elected as a Republican to five terms in the United States House of Representatives, serving from January 3, 1957-January 3, 1969. He was not a candidate for reelection to the Ninety-first Congress in 1968. He died on January 7, 2015, in Charleston, WV.

Arch Moore was born in Moundsville, WV, on April 16, 1923, to Arch Alfred Moore Sr. and Genevieve Elizabeth Jones. He graduated from Moundsville High School and worked in various jobs, including as a timekeeper for the Bechtel Corporation.

In 1943, he was drafted into the military and selected for Officers Training School and the Army Specialized Training Program (ASTP), which put soldiers into accelerated courses in various disciplines. He was placed at Lafayette College (near Allentown, PA), to study engineering and train as a soldier. Following D-Day on June 6, 1944, the Army terminated the ASTP. Moore was assigned to Company G, 334th Regiment of the 84th Infantry Division and sent to Europe where he served as a combat sergeant. In a battle in November 1944, 33 of his 36-man platoon died, and Sgt. Moore was severely wounded when a bullet ripped through the side of his face. He was transferred to Liege, Belgium, where his face was reconstructed, and he used public speaking as part of his physical therapy. He was awarded a Bronze Star and Purple Heart for his service and was shipped home in March 1946.

Moore enrolled at West Virginia University in Morgantown, WV, in June 1946, entering school as a junior with the credits transferred from Lafayette College. He majored in political science and became a well-known figure on campus through involvement with extra-curricular activities. He was a member and president of the Beta Theta Pi fraternity, wrote the first WVU student body constitution, and served as student body president. He organized fundraising for the Mountaineer Mascot statue and started Mountaineer Day, which later became Mountaineer Week. After completing his bachelor’s degree, Moore enrolled at WVU College of Law.

While at WVU, Moore met Sadie Shelley Riley (known as Shelley), an undergraduate student from Uniontown, PA. In August 1949, Shelley and Arch married. Shelley worked in the film section of WVU Library, and Arch finished his law degree in May 1951. They then moved to Moundsville where Arch practiced law with his uncle Everett Moore, a politician and prominent attorney.

Arch and Shelley had three children together, Arch A. (Kim) Moore III, Shelley Wellons, and Lucy St. Clair. Daughter Shelley would go on to serve in the U.S. House of Representatives (2001-2014) and the U.S Senate (2015-present).

In 1952, Moore began his political career when he won his uncle’s former seat in the West Virginia House of Delegates. After serving two years, he became the 1954 Republican nominee for the First District congressional seat, but he lost to sitting Congressman Robert Mollohan. In 1956, Mollohan left Congress to run for governor, and Moore won the seat over Democratic candidate C. Lee Spillers in a close race. Moore went on to serve six terms in Congress, 1957-1969, winning as a Republican in a predominantly Democratic state. Moore’s district expanded after the 1960 census resulted in eliminating a West Virginia congressional district. Moore defeated Congressman Cleve Bailey to represent the new 13-county district.

During his congressional career, he supported civil rights and public works bills and was involved in several significant pieces of legislation. As a member of the Judiciary Committee, he worked on The Criminal Justice Act of 1963, The Civil Rights Acts of 1957 and 1964, and The Immigration and Nationality Act of 1965. He made numerous international trips, in particular visiting Vietnam several times during the war. During one such trip in 1966 the helicopter he was riding in was struck by a bullet, disabling the rotors and forcing it to land.

After six terms in Congress, Moore ran for governor of West Virginia and was elected in 1968. He served two consecutive terms (1969-1977) and one nonconsecutive (1985-1989), making him the only person to serve three terms as governor of West Virginia. His tenure was characterized by extensive road building and investments in public education, welfare, and mental health.

Shelley Moore also made impacts as First Lady, championing issues related to mental health, education, and libraries. She opened the Governor’s Mansion to public tours and founded the West Virginia Mansion Preservation Foundation in 1985, raising funds to redecorate and preserve the building. She was active in numerous organizations, including the Girl Scouts, the Junior League of Wheeling, the American Red Cross, and the Montgomery (Maryland) County Cerebral Palsy Association. She was the longest serving first lady of West Virginia.

During his first term, Moore made headlines for firing more than 2,000 highway workers who went on strike, and he played a key negotiating role when thousands of miners went on strike over black lung benefits, leading to the disease’s designation as a mining disability. In 1970, the Governor’s Succession Amendment was ratified to the West Virginia constitution, allowing Moore to be the first governor to succeed himself since the 1870s. In 1972, he ran a heavily publicized election in which he defeated Jay Rockefeller.

As Governor, Arch made significant changes to the welfare and education systems, increasing monthly payments for about 20,000 families with dependent children and beginning payments for thousands of blind, aged, and disabled individuals. He supported legislation to open public kindergartens for five-year-old children, adopting the national trend in West Virginia. In an effort to bring more tourists to the state, he was instrumental in building Charleston’s Cultural Center.

With funds from the state Roads Development Amendment, federal support through the Appalachian Regional Commission, and money remaining from the 1964 road bond, Moore was able to undertake one of the state’s largest highway expansion projects. By the end of Moore’s terms, part or all of Interstates 64, 68, and 79, as well as the West Virginia Turnpike, would be completed. Construction of the New River Gorge Bridge also began, and once finished, it would be at the time the world’s longest single-span arch bridge.

Moore’s tenure as governor also engendered criticisms and corruption charges. He faced disapproval for abruptly reducing a $100 million settlement with Pittston Coal Company to $1 million for cleanup charges for the 1972 Buffalo Creek disaster. In 1975, Moore and an aide were indicted on charges of extortion but were acquitted. Toward the end of his third term, more corruption charges were filed, and in 1990, Moore was found guilty of federal charges of mail fraud, tax fraud, extortion, and obstruction of justice. He served three years of a five-year prison term and was released in 1993. Though he pled guilty, he later maintained his innocence. 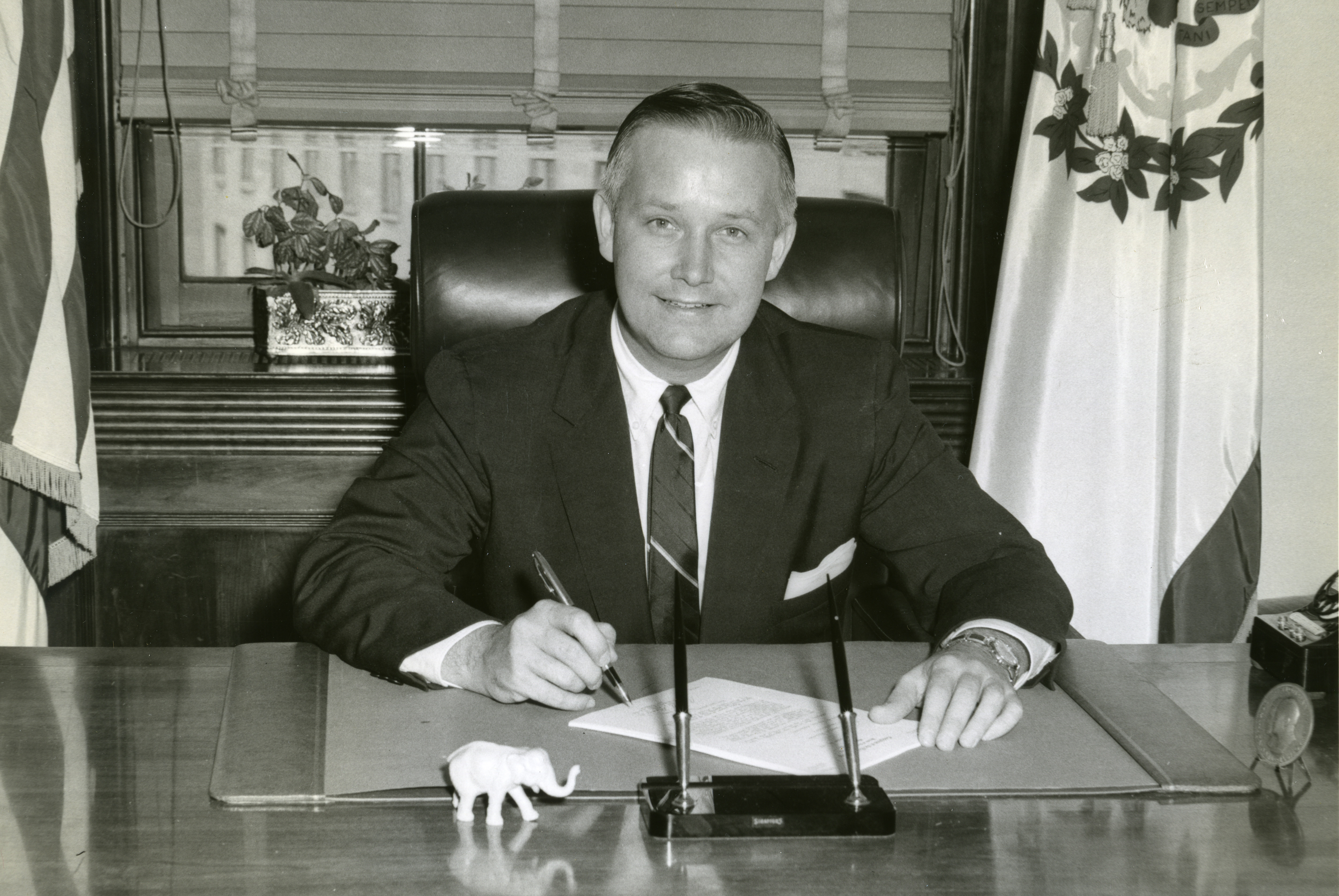 Representative Arch Moore poses at his desk in his Washington, D.C., office. 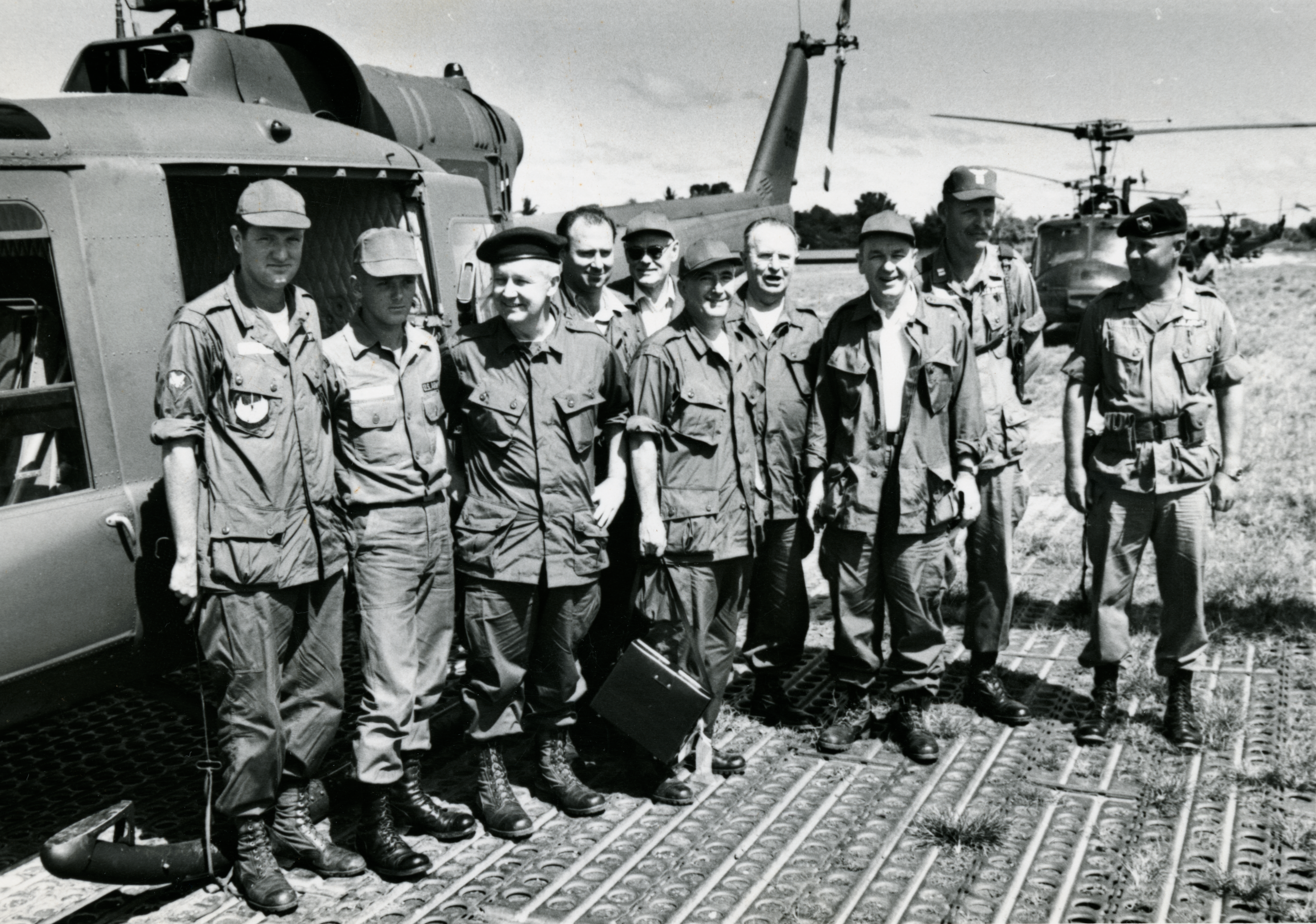 Congressman Arch Moore visited Vietnam several times during the war. He is pictured here with other members of the delegation in front of a helicopter in November 1965. 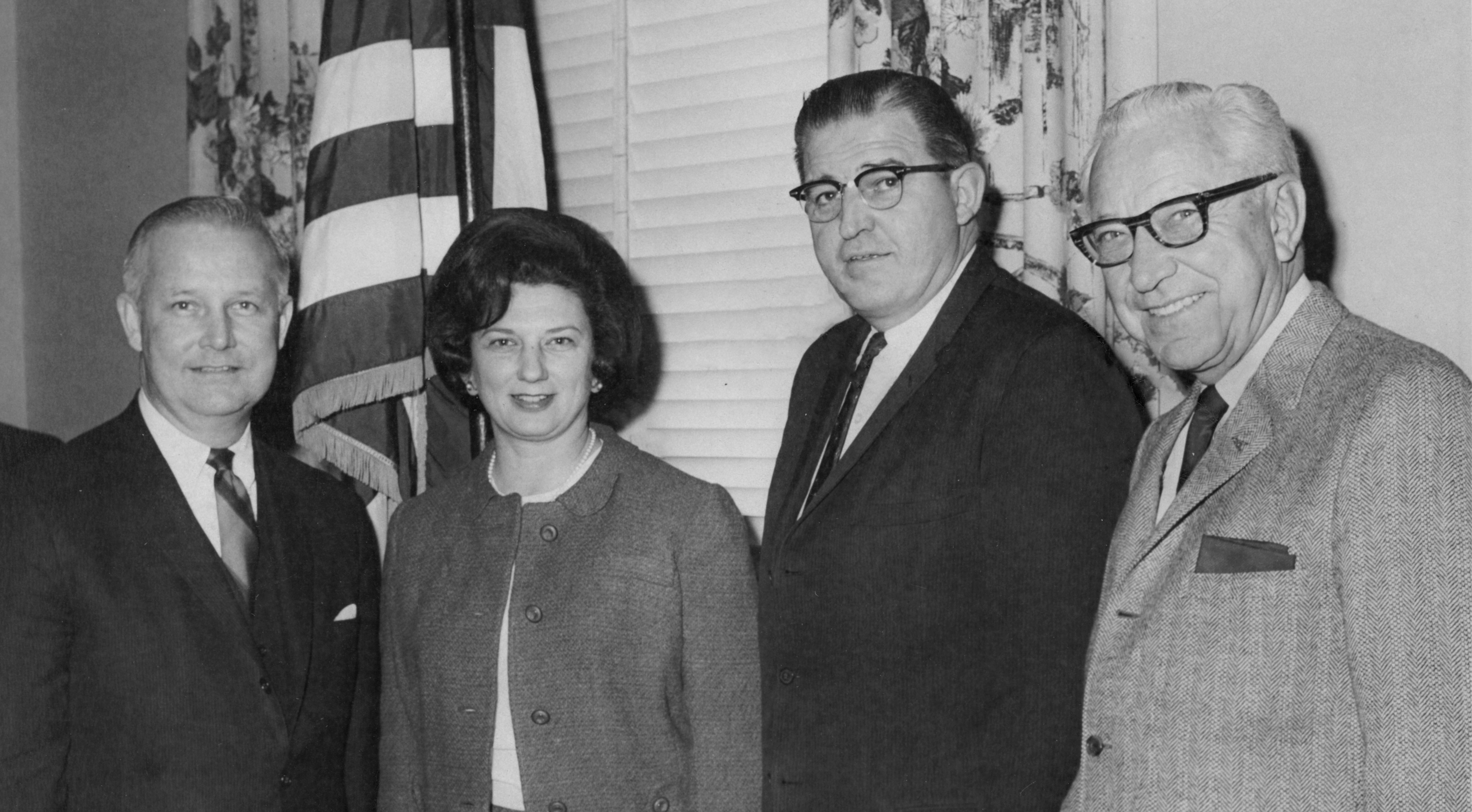 Arch Moore and Shelley Riley Moore married in 1949. She was an engaged political spouse and would later serve as First Lady of West Virginia for three terms, championing issues related to mental health, education, and libraries. Congressman Arch Moore and his wife Shelley pose with two unidentified men in 1966.